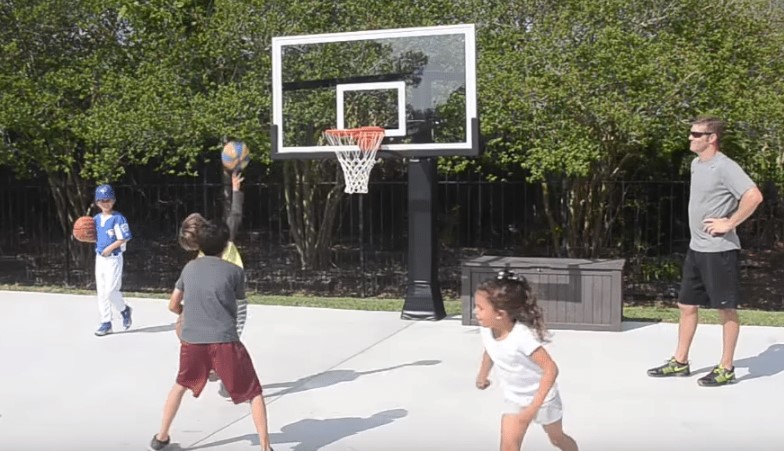 There is a common saying that every inches mater in a game’s measurements. Especially when we talk about the diameter of a basketball rim or hoop, then every centimeter matters.

The standard diameter of a basketball rim (hoop) is 18 inches or 46 cm. But it could be a slight variance in some sort of playing. Such as recreational games, international, school-level games, etc.

In this article, I’ve shared every single piece of information about a basketball rim and its measurements. Staying with us till the end will increase your idea about the rim. So, let’s jump in.

What Is The Actual Diameter Of the Basketball Rim?

What Is The Universally Accepted Diameter?

Basketball is now skyrocketing in terms of popularity with 825 Million followers worldwide. If you talk about America, you won’t find a house without a basketball fan. The craze of basketball is spreading everywhere.

The rules and measurements of the game are almost the same in every competition and hardly seen a major difference there. Recreational and picnic events are out of the sports category. They have been playing for fun.

So it can be said that the universally accepted diameter of basketball rim is 18 inches or 45 cm with 9 inches radius.

What Is The Length Of The Net and why it connected with the Rim?

Basically, the net is attached to the rim to ensure visual recognition of a basket. The net makes it easy to confirm if the ball has passed through the rim at first appearance. The net is free at the bottom and allows the ball to fall down.

The first time the net was closed at the bottom. So, just like a peach basket, a man had to climb the hoop to retrieve the ball. Later in almost 1906, the net was cut off from the bottom to let the ball fall down.

According to the NBA rulebook, the net of the rim should be hanged between 15 to 18 inches from the rim. NBA also states that the thread count of the net has to be more than 30 and less than 120 of the total threads.

The Purpose And Dimension Of The White Rectangle Above The Rim

You may have noticed in every professional competition there’s a rectangle in the backboard just above the rim. If you know the NBA has a section about this rectangle on their rulebook.
Let’s see the importance, purpose, and dimension of this rectangle.

Dimension: The National Basketball Association clearly stated that there must be a 2-inch white rectangle mark on the transparent backboard centered just behind the rim. The rectangle should be 24 inches wide and 18 inches in height. The base of the rectangle must be started from the rim.

Intention: when the player runs with the ball, it is quite difficult for them to target the rim and throw the ball while in speedy movement. On the other hand, backboards on the competitive game have to be transparent. So, the transparency of the backboard may affect the target accuracy of the players. This rectangle works as a visual target for them when they try to shoot the ball. This rectangle helps players to set targets from a distance when they are running.

There are basically three types of basketball rim available on the market.

Standard Rim: Standard rim is directly attached to the backboard and has no spring on it. Because of not having springs, it can easily damage the backboard. It can also be the reason for the injury of a player. When a player goes for a dunk, the standard rim does not bend down. So, it increases the chances of breaking the blackboard.

But because of being exposed, it has the chance of getting rusted. If the spring somehow gets touched in wet weather, it increases the chance of having rust.

Enclosed Spring Breakaway Rim: These types of the rim have the spring covered. So it hardly gets touched with wet weather. That’s why it ensures the best long-lasting service. These types of the rim are seen in top and high-level hoops. The enclosed breakaway rim offers safety, pro, and long-lasting playing.
The NBA, The FIBA, The NCAA, all professional leagues used enclosed breakaway rims.

How Big Is A Basketball Rim Diameter?
The standard and universally accepted diameter of a basketball rim is 18 inches.

How Long Is A Basketball Rim?

The rim is made of a 1.6 cm steel rod with 18 inches diameter inside.

What Is A Rim Basketball?
The rim is a metal circle which is attached to the backboard. To get a point, a team has to send the ball through this so-called rim.

What Size Is An Official Basketball?
Size 7 is considered the official basketball size for most men’s basketball competitions.

Do 2 Basketballs Fit In The Rim?
The diameter of the rim is 18 inches so the radius is 9 inches. The standard regulation of official basketball is 9 inches. Two men’s basketball will fit in a rim but won’t go through.

The size of the NBA rim is the same as NCAA, WNCAA.

What Is The Weight Of An Official Basketball?

The diameter of the basketball rim is almost the same in all major competitions except FIBA. The NBA, NCAA, WNCAA uses exactly 18 inches diameter-based rim and 10 feet above the ground.
Thanks for staying with us till the end. Hope this article helps you a lot. If you have any questions regarding “the diameter of basketball rim”, please let us know. We’ll be there to meet your satisfaction.