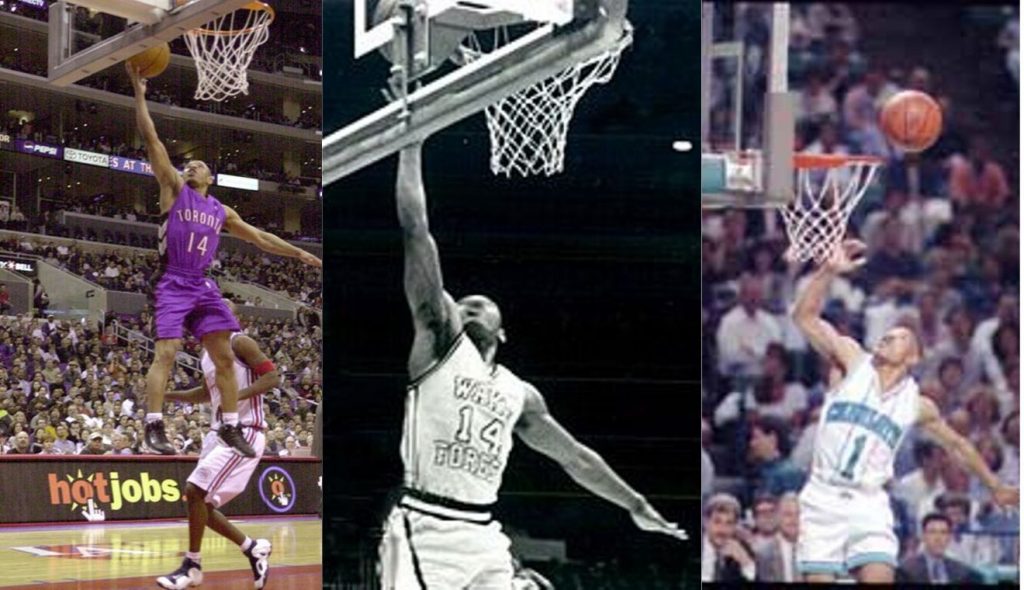 On 4th December 1990 during pregame practice, his vertical jump was measured 44″ inches, it was an unbelievable performance for this player against the rumor that he couldn’t even dunk. [According to an interview]

Performing dunking during a basketball game is an important but difficult task. Especially for short players, it’s much complicated. Muggsy’s hand was small to perform a dunk.

In 2016, bogues said in an interview with Coach Mag. “I never dunk in the NBA game. but I can dunk a basketball without any Problem.”

According to the NBA.COMs another interview, the interviewer asked a question to him, “Muggsy be honest with me; Can you dunk?”

In addition, the answer was “I tipped once in college and dunked in high school. I can still touch the rim. I’ve always been a guy who has been able to get off his feet. I’ve still got a little hoop for my game”.

But the question is why he didn’t even dunk in NBA?

The answer is too simple, dunking is too difficult during the game, especially for the shortest person. That’s why maybe he didn’t dunk in the NBA game. Also, he stated that he could have done it.

Now according to all the pieces of evidence, interviews, and quotes, we could be sure he can dunk. I hope there are no more doubts about it. Now we understand his life segmentation so that it can become more clarified.

Muggsy Bogues is the first shortest player in NBA. He was An outstanding defender, talented, and fast-and-furious performer, who could grab all audience minds. He was a technical and talented player on the basketball court.

His good communication and leadership points make him one of the greatest players in the history of the NBA. He knows his power. If you know your strength, then you can use it quickly, and your gaming strategy will work 100% during any game.

That is not a reliable factor we will discuss more, and we give more references to it. Our target is to get credible information about his dunk. I have covered the highly incredible data to identify this factor.

A little overview of Muggsy Bogues

Bogues was born on 9th January 1965, in Baltimore, Maryland. He is 5 ft 3″ inch in height due to also known as “The shortest player ever in the NBA.”

He was a Point guard player, and his jersey number was 1, 14. NBA was drafted in 1987 by Washington Bullets. In a total of 14 seasons, he gave an excellent performance.

Muggsy Bogues first played a hometown rec league in 1974. Then he played for Dunbar High School Poets in the 1981-82 and 1982-83 seasons. These seasons confirm his life’s entry to the basketball field due to the wins of the back-to-back championship. In 1983, he attended wake Forest University on a basketball scholarship and then in 1986 played with the U.S National team in Spain.

Finally, In 1987, the NBA enlisted him with Washington Bullets, and his jersey number was 12. And after some years later, his jersey number becomes 1. He won many awards and championships during his 14 seasons. In 1987 he won the Award from Frances Pomeroy Naismith and was one of his career highlighted awards. In the same year, he won the first term all ACC awards.

We already know that Bogues’s height was 5 ft 3 inches, and he was the shortest player in the world. A 5 ft 3 inches man, how did he jump 44 inches? An astonishing performance, right?. Now the question is, why can’t you do this? Can you do this or not? The answer is, of course, you can. But you should practice and be confident. Here is a video about some highlighted performances of Muggsy.

According to Bogues’s interviews, We can claim that he could dunk. But the problem is, It’s not confirmed officially.

We already know that Bogues could dunk and know about his biography. If you want to be a slam dunker, this segmentation could be very inspiring for you. Everyone wants to become a successful dunker. If you look at Muggsy Bogues, I hope your confidence will automatically improve. The videos I’ve provided will help you to find the best tips and tricks to become an enormous dunker. If you get benefited from here, this is the success of this content. And if you have any questions, please comment here below. I will try to answer.