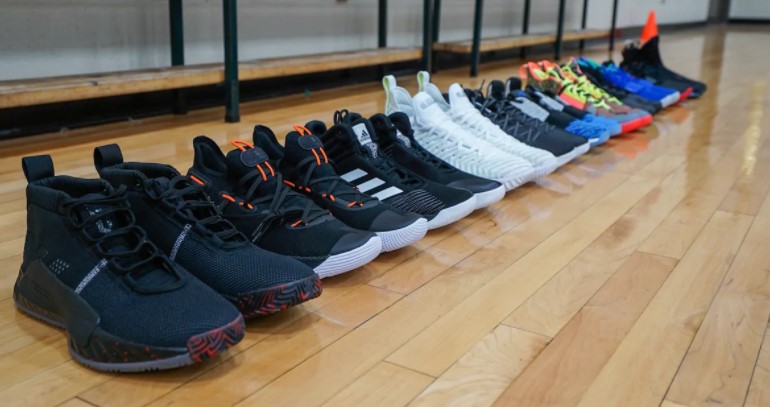 The difference between a brand and a non-brand started from the process of manufacturing. Like, the Choice of raw materials, quality of finish, attention to the product, and reliability. A brand is like a source of trust because any established brand’s first priority is their customer’s satisfaction. Every brand which we see now as a brand was a local shoe manufacturer in its startup. They have become a brand by their innovative design, unique style, and best customer service. So here we have covered the 7 best basketball shoe brands.

Nike is the world’s largest supplier of sneakers and sports equipment. It was founded by the University of Oregon’s track athlete Phil Knight and his coach, Bill Bowerman, on January 25, 1964. In the beginning, it was named Blue Ribbon Sports (BRS), but on May 30, 1971, it officially changed its name from BRS to the name of the Greek goddess of victory NIKE.
Nike first introduced their first basketball sneakers in 1971, as the Bruin and Blazer. Both were made of leather and successfully attracted the attention of buyers. Nike introduced the Air Force 1 in 1982. In 2020, Nike’s estimated net value was approximately 34.8 billion U.S. dollars. Nike has brought us a lot of popular sneakers like Air Jordan, Air force, Air Yeezy, Air Huarache, Nike Dunk, Air Max, etc.

The Air Jordan series was first created for the formal basketball player Michael Jordan by Nike in 1984 and also released to the public in the same year. By then, it has been holding a great attraction to the public. The series is well known for its unique design, great looks, and comforts.

Adidas is the largest sportswear manufacturer in Europe and second in the world after Nike. The company was founded by Adolf Dassler in 1924. The company had faced ups & downs and finally become popular in the mid of 1980s. Adidas is well known for its great price value, reliable and durable sneakers. The brand provides high-quality based, comfortable, and stylish shoes. Adidas has signed players like James Harden, Damian Lillard, Derrick Rose, Donovan Mitchell, etc.

Reebok is an American footwear company and subsidiary of the German group Adidas. Joseph William Foster founded the company in 1958. Reeboks innovative idea, newly introduced design, great teamwork has made the company a brand. Reebok the Question and Reebok Pumps Original are the top-selling basketball sneakers of all time. From BB to Kamikaze, from the 90s to Shaqnosis, whatever you choose, you’re going to grab the best sneakers of great traction and comforts.

Puma is the third large sportswear manufacturer in the world, founded by Rudolf Dassler in 1948. Puma has brought the basketball shoe revolution to another level. The NBA’s star players like Deandre Ayton, Marvin Bagley III, Michael Porter Jr., Kevin Knox, and Zhaire Smith put their rely on Puma. Its unique design, comforts, and good support are going to stick you on the court.

Under Armour is an American sports equipment company founded by Kevin Plank on September 25, 1996. Under Armour is one of the best-selling shoe companies in the world. The sneakers will offer you the best support, better traction, comforts, and long lasting performance, and will make a statement about yourself. The NBA sensation Stephen Curry has signed a contract with Armour. So, let your inner Stephen Curry come out with these stunning shoes.

Anta was founded by Ding Shizhong in 1994. It is the world’s third-largest company based on revenue of 2019. The powerful solid sole will let you stay active on the court and give your 100% to the game. Those shoes have been built with an attractive outsole that will give you the power to instantly stop anywhere in the court. From Klay Thompson to Rajon Rondo, a large number of NBA players rely on Anta.