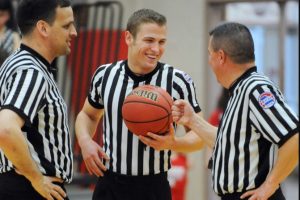 Most of the sports have one or more than one referees or umpires, whose/whom the main activity is to look up that the game is occurring according to the role and regulation. Among them, basketball is one of the most difficult sport to officiate due to the speed of the game, complex rules, and immediate decision requirements.

If you know all the rules and how to apply them to the court, then you could also be a good referee. Their duties are divided by the position as the timekeepers don’t perform the same activity as a scorer.

How many referees are required officiating a basketball game?

There’re two standard methods to officiate a basketball match. The game can be played by either a “two-person” or a “three-person” mechanism. It depends on how many officiate are available.

Two-person method: In the two-person method, each official officiate the game either the lead or the trail position. The lead officials usually stay in the baseline of the court. The trail starts from the free-throw line on the left side of the court. Officials often change their position during the game to cover the whole court in the best possible way. As the game switch from one end to the other, the lead conversely becomes the trail. The officials often change the position especially when the lead calls a foul.

Three-person method: In the three-person mechanism, the court is divided into three parts. Each part has a specific official. The lead official determines the position of the other two officials. Usually, the lead moves to the strong side of the court, where the ball is located, especially if there is a “pop-up” player. The official, who is on the same line as the lead, takes the position of the top three point line and becomes the “trail”. The same way the third official stands nearby the “free-throw” line and becomes the center official. That creates a triangle to cover the whole court.

Duties of a basketball referee

First of all, before start the game, the referee has to check that the game is ready to go and during the game, there’re some things which a referee should implement in the court. Like,

The referee should stop the play if the couch requests substitutions. There might a little change in the local game or the school’s friendly competitions. So the referee should know what specific rules are being uses.

According to some specialists, to be a good basketball referee, you should follow some things. This does include before, during, and after the game. Specialist expresses some does and don’ts before starting or during your official career. As like,

Know all the rules according to league: The all you have to know is the rules of the game. If you don’t know what the rule is, then how could you officiate the game? You have to know all the rules and how to apply them on the court, But there’re little bit differences between the local or international rules. Before start officiating the game, make sure about the local or the current league rules; otherwise, you will get stuck into the game.

Prepared for facing the furious couches: Most of the coaches think that they lost the game because of the official. Even, if you didn’t do a favor to any team, and tried your best to officiate the game according to the rules too. Sometimes they get so much angry that they uttered some unusual language even in youth basketball. So, keep trying to avoid them during and after the game, and don’t be hesitate to give them a bench warning.

Handle or avoid irate parents: Once I was officiating a basketball game, and all of a sudden, I made a wrong call. One of the parents from the team my decision goes against, went to court for punching me. Such a terrible moment, I was perplexed and couldn’t realize what to do.

This happens heavily in youth basketballs or school competitions. So anything could happen with you in court. Just ignore those things and stay focused on the game.

What if called wrong? You tell me first who never made a mistake. When I was in court, once I did so. I noticed that a player slapped the arms of the opposite player instead of slapping the ball, and the slapping sound was also so misread me. I called a foul, but in the replay, it was clear that he slapped the ball! The team lost the match because of my wrong decision.

It’ll happen. You can’t make the right decision all time. But what you can do, whenever you realize you made a mistake, admit it. This way you may not be able to change the result of the game, but you get more respect from the couches, players, and parents.

Understand your value: when you’re new in the referee career, you can’t charge a big amount for officiating a game, and nobody going to give you that. When I was new in this field, I charged 10$ per game. I did it on my weekend, which gave me around 80$ extra money per month.  After that, I went to a high school referee and charge a little bit higher. When I had entered college competitions, I could easily make 600-1200$ per month. Whenever I grow up in my experience, I grew up my fees also. You should charge a big amount but not in the startup. The NBA’s salary of an entry-level referee is 150,000$ per year, While an experienced referee earns 550,000$ per year.

Get prepared for officiating test: Almost every league will take an officiating test to check your officiating ability before choosing you. In this formal way, they just want to know that you know the rules of basketball. They could ask you some basic questions like, what an offensive 3-second violation? League-specific rules might include on this test. Some leagues will let you officiate a game to see how able you are.

Basic requirements of a referee

To become a basketball referee, you must fulfill some requirements in order to become a better official. Cause in highly competitive games, a little mistake could bring you out of the league. The basic requirements of a good referee are,

Being Physically Fit: as being a basketball referee, you have to be on the move. You need to Run among the entire court to make calls properly. According to statistics, in a competitive game, you might have to run 1-4 miles. Especially in a big event like the NBA, NCAA, you need to be more active than other games. Now think if you aren’t physically fit, would you be able to move on the court full 48 minutes?

Being Mentally Fit: as I described above, as being a basketball referee you have to tolerate so many things. Be sure you’re going to hear criticisms and complaints towards you. That’s why a basketball referee should be fit mentally. In school or youth basketball competitions, it happens a lot. So just bear and ignore all it and stay focused on the game.

Equipment: In a highly competitive league like the NBA, will give you all the equipment needed for officiating a game. But on a youth or school level, it’s different. You must have your own equipment. Cause the high school or youth association most of the time won’t give you that.

A referee should have,

Most of the recruiters want their referees to have some qualifications. But some league and organization might have different requirements. Most of them want qualifications like,

Educational qualification: First of all you must have at least a high school level diploma along with a basketball training certificate.

Experience:  Experience is a must needed requirement for most of the league. They simply can’t rely on you if you don’t have experience of officiating a basketball league or match. You can gain this by officiating in kid’s league or your local tournament.

Certificate: To referee in competitive games likes high school, college league, Pro leagues all you need is state certification. Most of the time the state takes training courses to complete, written tests and field tests to offering certification.

NASO: If you want to make a progress on your basketball referral, then consider joining NASO(National Association of Sports Officials). NASO is only one countrywide supporting association for officials in the U.S. they held educational programs and provide training materials to grow your officiating level.

Some league or associations may claim more additional requirements but With those three qualifications, you may all set to start a part-time job as a basketball referee.

Officiating options after getting certifications

After getting certified by NASO or acquiring all requirements, you are all set to start your career up as a basketball referee. But the one thing you need at this level is experience.

Also, get in touch with your local school associations leader, which often hosts a basketball league.

High school level: To officiate a high school league is a little bit strict at the youth level or local level. High school basketball games are state-sanctioned. You have to register in the state so that you can prove you’re a worthy official or referee. The NFH(National Federation of State High School Associations) is in charge of high school athletics in the U.S.A. Check all the things to register and start officiating at state-sanctioned high school. Officiating in high school means you have the experience of officiating games. Make sure you know all the rules and regulations as well as qualified for the game. Cause a wrong call may push you to the lawsuit.

Professional level: the close view of the best athletes in the world you’ll get when you’ll referee for NBA/WNBA. To join NBA/WNBA official you have to start from the NCAA Division I games. There’re many current and former NBA/WNBA officials you’ll find in NCAA Division I, so it’ll a good opportunity to learn from them how they get selected for the NBA refereeing.

Because of speed, Quick decisions, lack of decision-making time; being a basketball referee is one of the difficult tasks.

First of all, confirm that you have gained all the things a referee must have. Consider starting from youth level or junior level competition to get experience. Then register in the NFH office to gain the ability to officiate in High school games. To start refereeing in professional-level events like NBA/WNBA, join the NASO/NCAA Division level.

Stephen is a professional basketball player, and his hobby is finding the best tactics in the basketball game. He has been addicted to this field for the last 6 years, and he loves this sport. Based on his experience with different types of plying method. He is sharing his opinion about various types of tips, basketballs and it required gear so that a newbie basketball lover can easily start the right way.