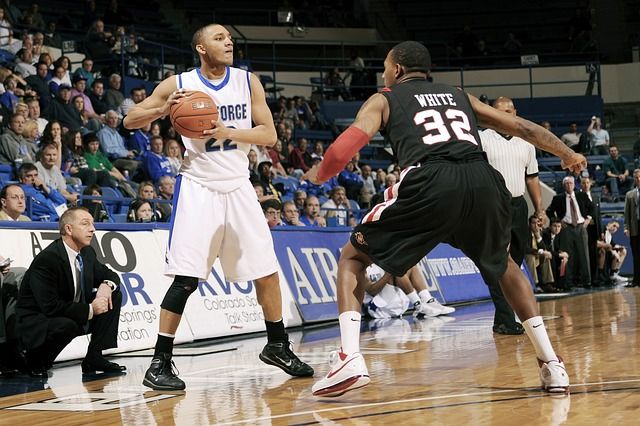 Are you a basketball coach for a young growing team? Man to man defensive mechanism is the best to adopt in the early stages of training. It involves every defensive player being assigned to an offensive player to defend them from scoring. This is the best skill to learn while in the early stages of learning basketball. It allows pressuring the ball while still protecting the basket. Hence it remains the best defense style since these are five defenders working together making it difficult to penetrate. So let’s go- Advantages of man to man defense in basketball

This type of defense helps prevent middle penetration in your team hence the other team is forced to penetrate from the sidelines. When middle penetration is blocked, it becomes easier to defend the opponents from the baselines and sidelines. When the ball is on the sidelines, weak side defenders move into help position, deny pass into the post, and prevent dribble penetration. With the ball at the corner, only defending half-court is needed. Therefore, this defense mechanism is the best fit for basketball growing teams.

Deny wing passing of the ball.

Once the ball has been passed to the wing side of the floor, applying this type of defense will prevent the opponent’s best shooter from getting hold of the ball. To get the ball out of the point guards, offensive players pass the ball to the wing. Man to man defense mechanism prevents it from passing back to point guards. This only leaves the ball with inexperienced point guards. Hence these point guards are not a key factor or influencers of that game.

Keeping pressure on the ball.

When the ball moves, every player in the court adjusts their position on the court, thus accumulating pressure on the ball. Players learn to be alert at all times, anticipating passes they might be able to deflect and possess the ball. This causes pressure on the outside, which harasses offensive players. Thus, it becomes difficult for the offensive side to see the floor and open team, making it prone to blind passes.

With man to man defense style in basketball, players always stay in a balanced stance to ready to react to the offensive player as soon as possible. The defender should always stay in a position that allows him to be able to stick out their arm full length in front and be able to touch the players they are defending. Defensive players should be in a position to keep their eyes on opponents’ player’s chests. A defender should always chase down their opponents around the court, dive on any loose basket to gain possession, and take charge if they are in a great position.

For the team to be effective defensively, there must be constant communication. This is more important when defending a screener or when positioned in a gap of the ball. Great defender is always in constant communication with the rest of the teammates compared to poor defenders. A great defender can be in a position to anticipate opponents’ actions, thus alerts teammates what is going to happen next in time. When good communication skills are employed in a game, defenders are rarely out of position to help his teammates. Awareness allows maintaining a relationship that has a better vision of the offensive side at the time. And it very important outdoor basketball game.

With man to man defense style, constant repositioning is achieved because a team must battle to establish possession of the ball. Repositioning is the backbone of the defense. This is because the players are not stationary, and they have to move when the ball moves or when offensive players move along the floor. Defensive players always get knocked off their position when trying to regain possession of the ball. They must work to regain their possession failure to which offensive players will create a breakdown in teams’ defense and create a scoring opportunity.

Man to Man defense helps create trust and servanthood among the team.

Players defending screeners should always give their best to help the team from defeat. Failure to employ this defense mechanism, the offensive team will have a chance to capitalize on and score. Helping teammates is always greater than the man to man defense. At some point, the cutter might be left open and trust his partner will cover-up. There is an element of trust between defenders for the technique to work. The moment one player fails to serve or trust his teammates while defending the screen might lead to the breakdown of the defense.

Man to man defense creates a spirit of aggression.

The good defense system is normally created by toughness, determination, aggression, and relentless efforts from the entire team. These are the things that cannot be turned off and on using a button hence as they are important during practice and game. Players are advised by their coaches to be aggressive, to be physical, but to avoid fouls which offensive players might capitalize on. In case the ball gets into the low post, the defenders must work on getting it out of that position. This calls for aggression and toughness from the entire team.

It is easy to keep track of players when in the game while using man to man defense style. Each player is always alert on which offensive opponent to handle. Therefore, the opponent’s number of assists and scores are reduced. Through this defense mechanism, the number of fouls committed is reduced. This is because players feel more accountable and try to reduce the number of free throws. Rebounding from man to man defense is easier since players know which player to block out. This will greatly prevent the opponents from penetrating.

Stephen is a professional basketball player, and his hobby is finding the best tactics in the basketball game. He has been addicted to this field for the last 6 years, and he loves this sport. Based on his experience with different types of plying method. He is sharing his opinion about various types of tips, basketballs and it required gear so that a newbie basketball lover can easily start the right way.